The Atletico Madrid attacker has had a good season so far, managing to notch up 7 goals and 11 assists in 42 games in all competitions. However, the attacker has failed to get a special card in FIFA 21 previously, with this TOTS card being his first.

Players will be able to enjoy a nice upgrade with the TOTS Correa card, with his passing, physical, shooting, pace, dribbling, and defending all upgraded hugely compared to his regular 82-rated gold card. 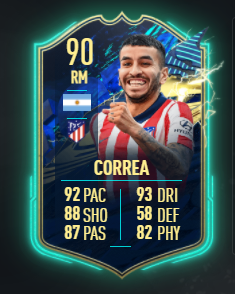 The objectives will all need to be completed in the Live FUT Friendly, Community Challenges lobby. The objectives include winning eight matches, playing 12 matches, scoring 14 goals, scoring 5 finesse goals, and assisting seven goals.

The Team of the Season promotion highlights the best players from the different leagues across Europe, with more SBCs and objectives set to be released every week until the end of the TOTS promotion.

Players are currently also able to earn a nicely upgraded 89-rated Team of the Season Federico Chiese from Juventus through an SBC. The SBC will be available until the 30th of April and will currently set you back between 175-228k depending on your platform.

Will you be completing the objectives for the TOTS Correa card? And are you looking forward to playing with him? Leave your thoughts in the comments below.